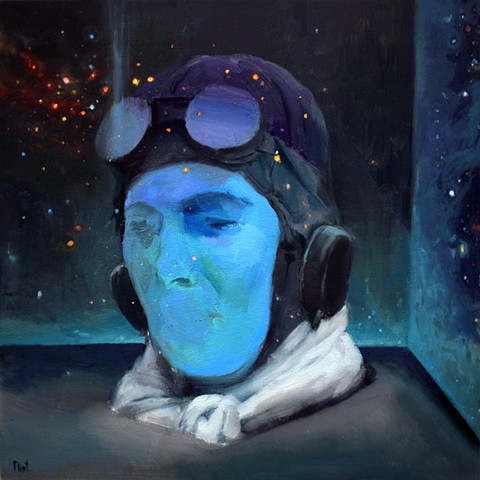 Mnemosyne in Greek literature is the embodiment of memory and mother of science, art and literature. As the inventor of language and words, she preserves the stories of history and myth (including their entanglement), and was viewed more as a historical figure and less as a god.

This series of paintings explores the blurring between fact and fiction that dates back to ancient Greece, and beyond; while paying homage to female fighters pilots, whose stories aren’t as well known. The paintings are derived from historical women, however, they function as archetypes or symbols or memories, rather than distinct individuals, and thus are not portraits. They are the memories of these figures, which remain in an incomplete state.

Even though the Greeks hadn’t realized how identity was formed or culture preserved on a scientific level, their instinctual blending of fact and fiction has been reaffirmed through neurobiology and modern scientific advancements in studies of the brain. Research has shown we collect experiences and every time we return to an experience it is recalled differently and in a different way, which forms a new pathway to that memory. This amalgamation of continuously altered memories shapes identity. As we remember our past self, myth inevitably finds a way in. In addition, analysis of our atomic particles has revealed we are 70% comprised of star matter, so the worship of the celestial was also insightful by the Greeks. Space is the river of time much like memory.